Belize Real Estate is becoming more and more of a hot topic for Americans, Canadians & Europeans as more learn about the tremendous benefits of owning real estate in Belize. Whether it be for investment or lifestyle purposes, Belize stands out amongst other countries in the Caribbean & Central America region for several reasons. These are the cornerstones of relocation to the county and are as follows:

When you consider that 90% of the U.S. only speaks English, this is a huge benefit of Belize. People love the fact that when they go to their doctor in Belize they can communicate in their native tongue or when they go to fill out legal documents they can read them in English.

Belize is the only English-speaking country in the region, this is a direct result of British influence over the years. The British also left something else extremely beneficial behind, their legal system. Other countries in the region (Mexico, Guatemala, Costa Rica, etc.) adopted the Spanish legal system, Napoleonic Civil Law. When it comes to Belize real estate there is a key difference between the two. That is, with British common law there is full foreign ownership. When Americans, Canadians, or any foreigners for that matter invest in property they receive a fee simple land title along with their property and truly own it.

When you invest in property somewhere with Napoleonic Civil Law there are two-tier ownership rights where residents can own, but foreigners must do so through a corporation with local directors or other grey area strategies. This is not the case in Belize, where foreigners have full ownership under British Common Law.

Proximity to the U.S.

Belize is 750 miles from the nearest point in the U.S. and has direct flights from L.A., Miami, Fort Lauderdale, Denver, Dallas, Houston, Atlanta, Newark, Toronto, Chicago, & more locations being added. The flight from Miami is roughly an hour and a half making it very easy for Americans and Canadians to get down in a very short period.

Below you can see the direct flights to Belize;

One of the things about Belize that most don’t know is that the official name of the territory was changed from British Honduras to Belize in June 1973, and full independence was granted on 21st September 1981. Given that Belize as a nation is relatively young, it has had the opportunity to model policies and characteristics from other countries that it feels are beneficial to the country.

One of the biggest things Belize has done in this regard is dedicated 46% of its land to a national park and marine reserve, one of the largest portions of a country in the world to be a national park. Not only is this beneficial from an ecosystem perceptive, but it’s also highly valuable from a real estate investment perspective. When you put a 46% restraint on development, you increase scarcity, which as we all know leads to appreciation.

In Belize, there are no capital gains taxes and property taxes are extremely low compared to what many are used to in the U.S. and Canada. For example, property taxes on a 60’ by 75’ piece of land would be roughly $75 per year paid annually in April.

Belize is going through a state of high nightly rental demand with increasing tourism (44% over the past 5 years) without an equitable increase in the supply of nightly and monthly rentals leading to increasing rental rates and higher returns for investors. 2019 was the all-time high in tourism that Belize had ever seen, and the trend is showing absolutely no sign of slowing as Belize’s tourism in 2022 rebounded strongly after the pandemic.

The Belize Real Estate Market and Tourism are also looking promising in 2023. In fact, with the airlines adding as many flights as they have in recent years, Belize is expecting the growth to not only continue, but increase. With 70-75% of all tourists who visit Belize going to Ambergris Caye (San Pedro) during their stay, Ambergris Caye is the standout location for relocation and investment. 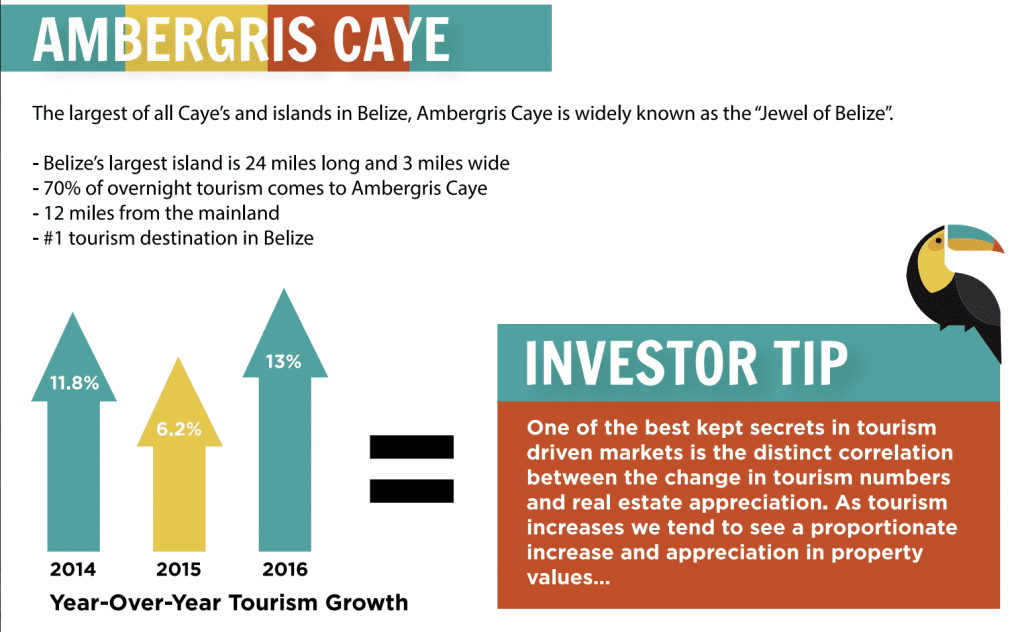 One of the best-kept secrets in tourism-driven markets is the distinct correlation between the change in tourism numbers and real estate appreciation. As tourism increases, we tend to see a proportionate increase and appreciation in property values.

As many of you may know (or maybe going through the process) more baby boomers are looking to relocate from the U.S. every day. About four million people will retire every year, as of 2014. From 2014 to 2034, about 80 million people are expected to retire. This equated to roughly 10,000 people retiring per day for 20 years. Obviously not all these people will choose to relocate however, according to an AARP life survey, roughly 28,121,000 people will be relocating outside of the U.S., and the area with the largest expected growth is the Central America & Caribbean Region.

When you factor in our list of retirement benefits (English speaking, Proximity, Legal System, Etc.) it is more than safe to say that Belize will receive its fair share of baby boomers. This is only leading to more scarcity in the rental market, as when baby boomers move down, they generally take inventory out of the rental pool as they will live in it year-round as opposed to previous owners who would rent the majority of the year. When you factor these aforementioned thoughts together, you have the “perfect storm” for rental rates to increase and investor returns to increase.

There are many other benefits when it comes to Belize real estate. For the most part, Belize is still underdeveloped and sparsely populated so there is still plenty of room for growth, and property values haven’t come near adjusting to where they should be given the growth in tourism we discussed in the previous section of this post.

Another benefit of Belize is its economic and political stability. The economy here in Belize isn’t a one-legged stool, there are many facets to the GDP including agriculture, energy, transport & tourism. The government has shown it is a pro-foreign investment country by facilitating the process for foreigners and even bringing in the QRP program to reduce the costs and expenses of relocation to Belize.

If you have any further questions on Belize and looking to buy Belize Real Estate we are happy to chat via email or phone, feel free to reach out to RE/MAX Belize to chat and discuss your Belize real estate goals in further detail and get all your questions answered.

5 Mistakes People Make When Investing Offshore & How to Avoid Them