The Belize Barrier Reef or Belize Reef is a coral reef system that extends the entire coast of Belize. The Belize reef (also known as Mesoamerican Barrier Reef System) is a 300-kilometer or 190 miles long. The Belize Reef is without a doubt the #1 tourist attraction in Belize. The Belize reef is roughly 980 ft (or 300 meters) from the East Coast of Ambergris Caye (in the northernmost area of Belize) and 40 kilometers (25 miles) from the coast of the Southern areas of Belize (Placencia & Punta Gorda). Even though the Belize Reef is mostly in Belize, it is referred to as the Mesoamerican Reef since it is continuous from the Cancun reef system on the northeastern tip of the Yucatán Peninsula and continues down towards Honduras. The Belize Barrier Reef is the second largest coral reef system in the world after the Great Barrier Reef in Australia. Even though it is the second largest reef in the world, it is the largest living reef.

The Belize Barrier Reef is the top tourist destination and attraction in Belize. It is world-renowned for scuba diving and snorkeling. The Belize reef alone is responsible for attracting almost half of Belize’s tourism. It is also vital to the fishing industry in Belize. It is important to note that as part of reef conservation, Belize has banned all commercial fishing and off-shore oil exploration and drilling.

The coastal area of Belize is picturesque (both above and below the surface of the water). The Belize reef is an outstanding natural ecosystem system consisting of the largest barrier reef in the northern hemisphere and western hemisphere. The Belize reef has numerous offshore atolls, several hundred islands, and lush mangroves. The Belize reef creates a unique habitat that is home to many threatened species, including marine turtles, and manatees.

The Belize Barrier Reef Reserve System is one system comprised of seven protected areas and marine reserves located along the length of Belize. It is the largest barrier reef in the Northern hemisphere and represents all the main reef and coastal habitats. The network of protected areas within the Belize reef is large enough to maintain the necessary ecological environment. The geographic spread and diversity of the Belize Reef enhance its resilience, which is an essential factor when mitigating the environmental impacts of climate change, global warming, the potential risk of coral bleaching, and rising sea levels. The Belize Reef system also helps with the mitigation of storm damage and hurricane impact in Belize as the reef breaks up any large waves and potential storm surges.

An Atoll is formed when an underwater volcano erupts, which creates a seamount under the surface of the water. As the seamount builds, it rises above the water and becomes an island. Over time, reefs and corals grow around the island and the volcanic soil erodes away, leaving behind a circular reef and a large lagoon at the center. An Atoll takes thousands of years to create.

Belize is home to three of the four atolls in the Western Hemisphere. The fourth atoll in the Western Hemisphere is located in Banco Chinchorro in Mexico. The three atolls located off the coast of Belize are Glover’s Reef Atoll, Lighthouse Reef Atoll, and Turneffe Atoll. Lighthouse Atoll near Ambergris Caye is home to the famous Belize Great Blue Hole.

The Hol Chan Marine Reserve was established as a marine protected area in 1987 under the Fisheries Act (Statutory Instrument # 57) Laws of Belize. It incorporates the southernmost marine and coastal areas of Ambergris Caye including the barrier reef, seagrass beds, and mangrove islands. Hol Chan is divided into four zones which include no-take areas and zones that regulate and promote sustainable fishing practices. The reserve was originally divided into four areas: 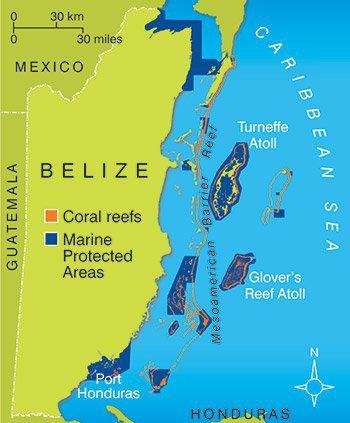 The Belize Reef system is the largest tourism driver in Belize as it attracts tourists from around the world for fishing, scuba diving & snorkeling. For more information on Belize or to learn about Belize real estate and Belize investment properties contact us at RE/MAX Belize.

The latest statistics for Belize tourism from the BTB (Belize Tourism Board) provide a clear indication that Belize tourism is moving fast on its path to recovery after the 2020 COVID-19 Pandemic. According to their latest number and figures, tourism in 2022 shows that Belize is nearly at pre-COVID numbers and overnight tourist arrivals to Belize totaled almost 300,000 (January to August), the largest number of overnight visitors recorded since the start of the Covid-19 pandemic in 2022. 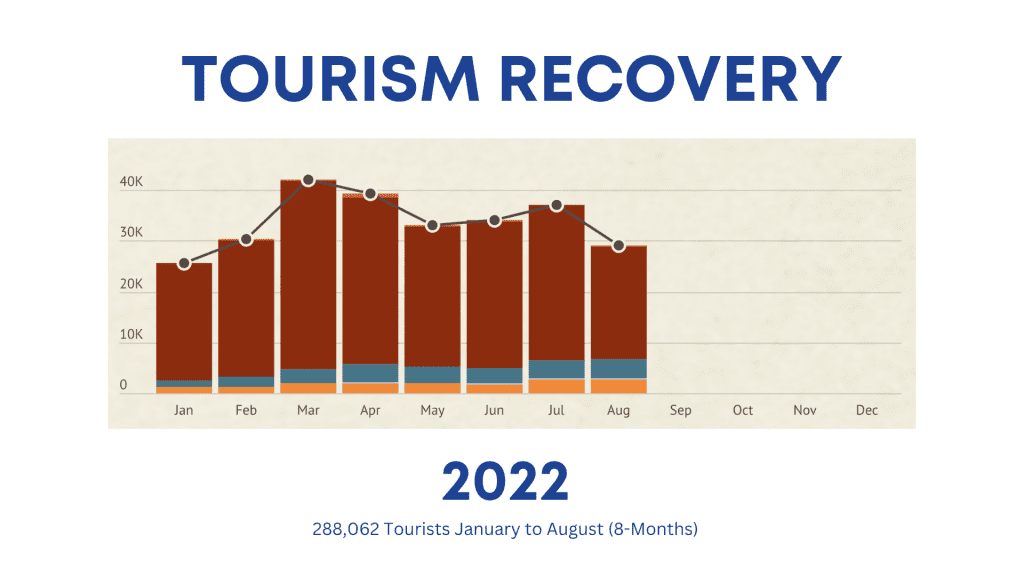 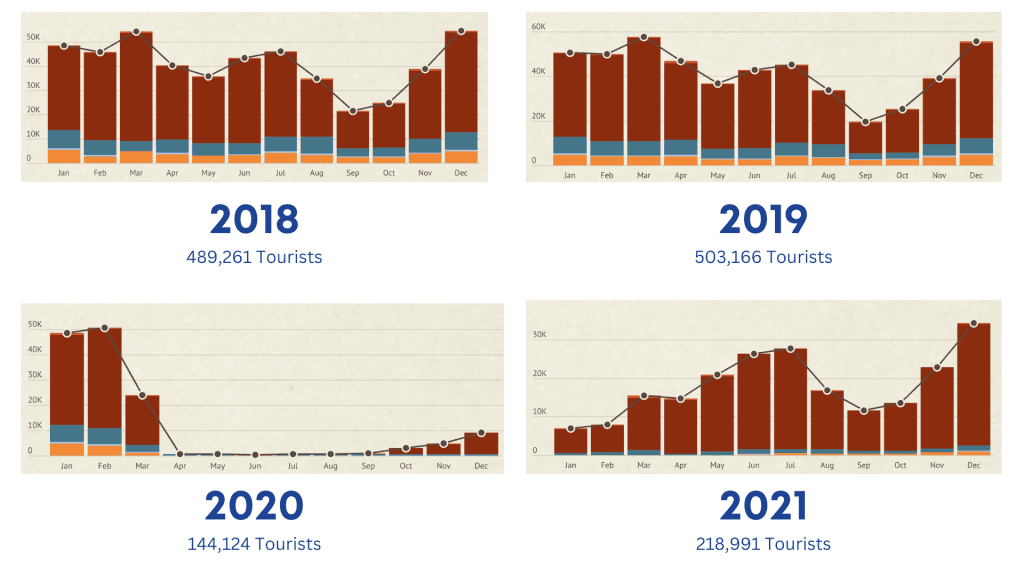 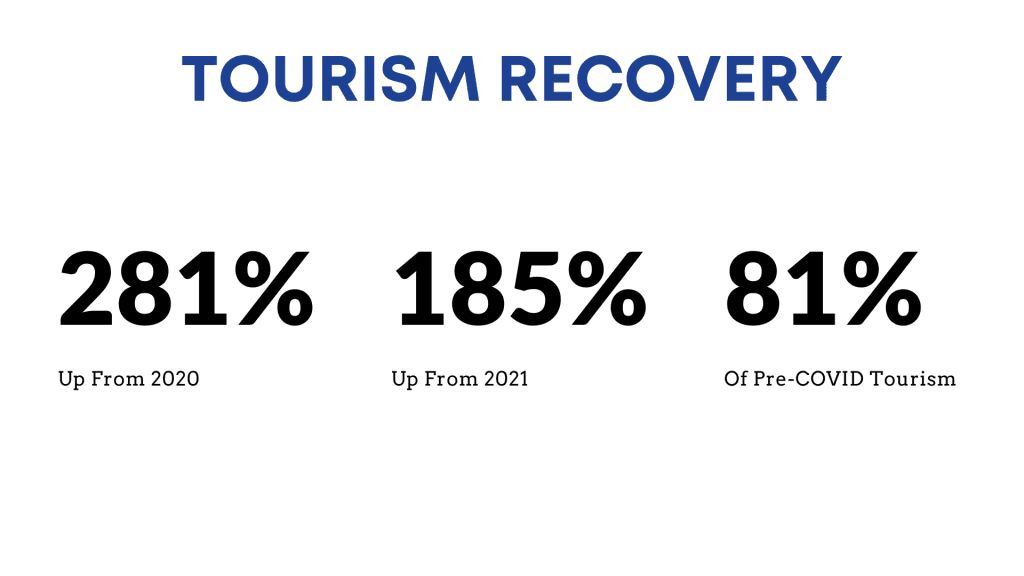 The Belize Tourism Board (BTB) states that it remains committed to improving Belize tourism stating that – “Together, we will aggressively and effectively promote Belize as the leading tourism destination and achieve full recovery of the industry for the benefit of both Belizeans and visitors.”

With the steady growth in tourism through the first 8-months of the year, the outlook remains positive as Belize’s tourism industry rebounds strongly. Coming into high season, Belize is seeing almost all international flights returning and flight routes have been reestablished.

Belize was one of the best-kept secrets in the Caribbean & Central America. Now the word is out, and Belize has emerged as a ‘must-see’ destination. Belize has something for everyone and is undoubtedly a unique and unforgettable getaway. From the lush jungles and rainforests on the mainland to the tropical Caribbean beaches on the Cayes (islands). Belize is the perfect place to explore or relax near the beach. With the resurgence of tourism, Belize also offers the perfect opportunity for people looking for a cash-flow vacation rental property. People come to Belize for the beaches but often stay for the people and culture.

Though Belize is a small country, it felt a huge impact in the wake of the global pandemic. With so much of the economy dependent on tourism, we are excited to see that Belize tourism has rebounded in 2022 and continues to grow into the next year (2023). Belize’s borders are open, and we are thrilled to welcome travelers back. As COVID restrictions have gone away, Belize tourism is trending upward, and there is no better time than now to start planning your Belize vacation. With tourism coming back the opportunities for Belize real estate investments are abundant. For more information on Belize travel and Belize real estate opportunities contact RE/MAX Belize!