Secret Beach on Ambergris Caye, Belize has been growing and developing fast, and with all the new development there has been even more momentum around the West Coast. Between new homes being built, exciting new communities, and announcements of high-end resorts, the West Coast is really at a tipping point! Because of this, we wanted to update you on everything happening at Secret Beach.

You can see a Secret Beach 2022 Video below;

Everything around Secret Beach (the beach clubs, bars, restaurants, boutique hotels, homes, etc.) happened between 2016 and now. With the recent announcements, the trajectory is starting to take off!

You can see the growth and development of Secret Beach in the image and video below; 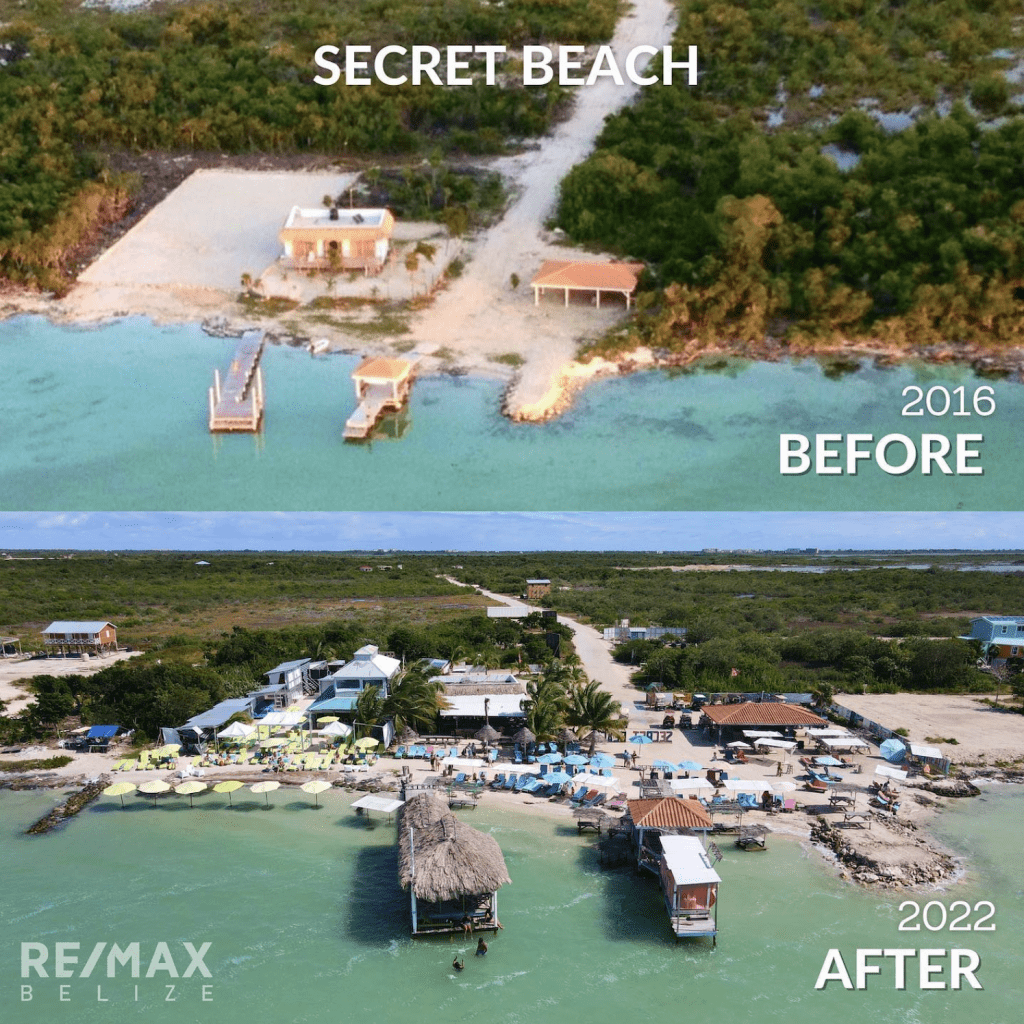 Secret Beach has become one of the region’s most popular beach destinations, and it is also starting to attract high-end developments, including the recently announced Six Senses Resort Belize!

Between the Six Senses, Ixchel Resort, Habitat Belize community, and the other upscale developments coming to the area, you will likely see equity appreciation and property prices rise because of it.

The recent announcement of the Six Senses resort has been the biggest news for the area since Leonardo DiCaprio purchased his island, Blackadore Caye. Six Senses is one of the top internationally recognized luxury hotel brands. It will also be the first official 5-star resort brand on the island of Ambergris Caye and will be located near Secret Beach. 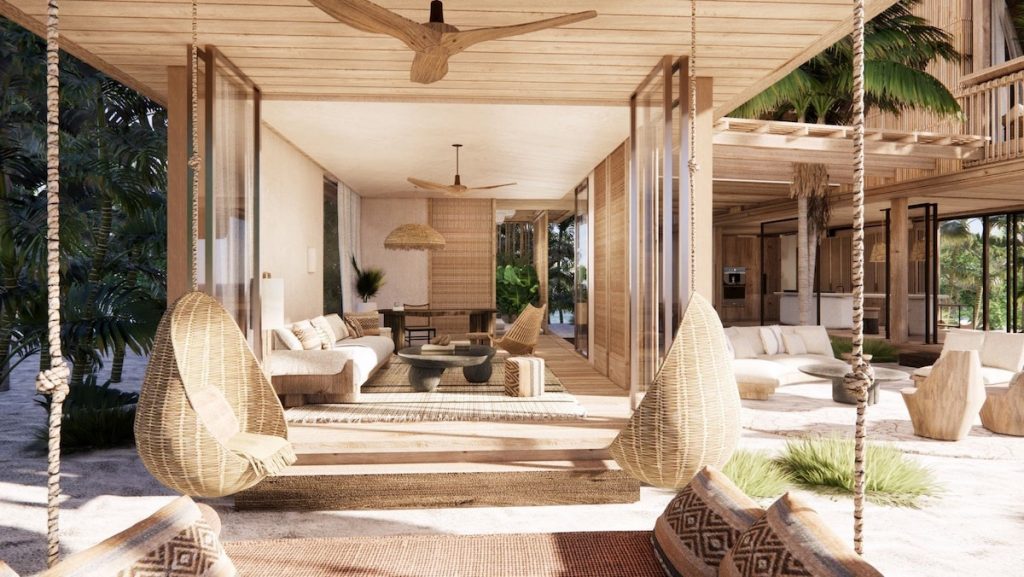 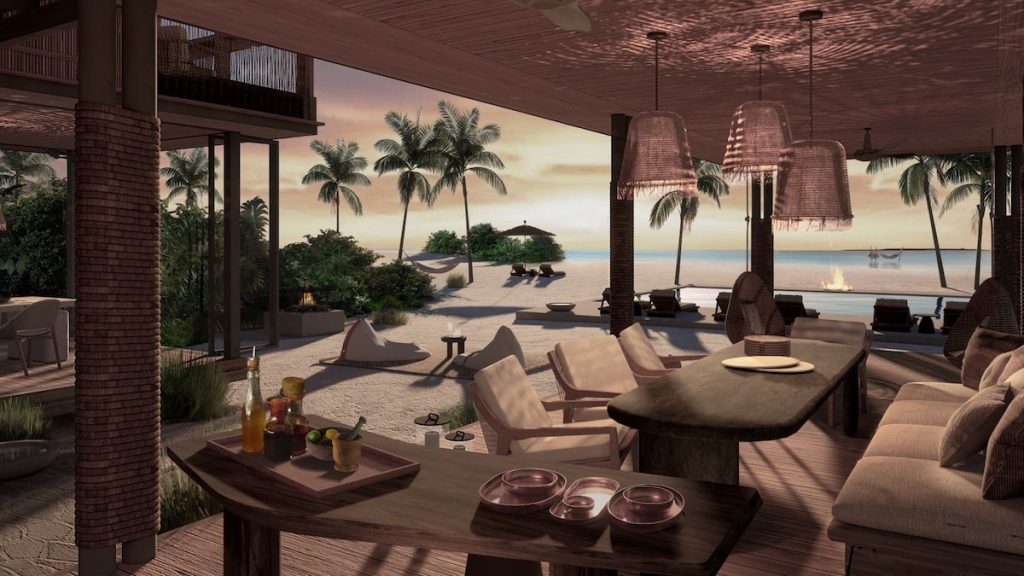 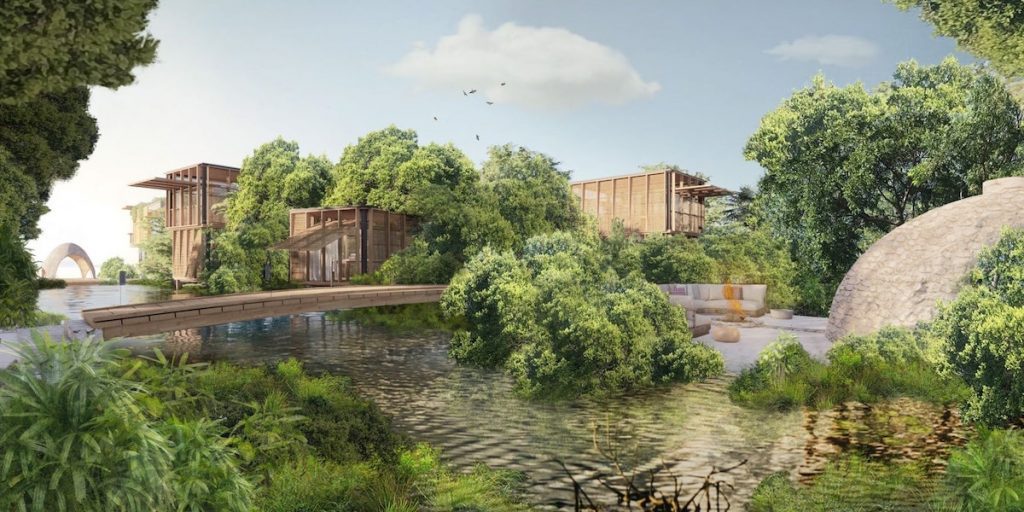 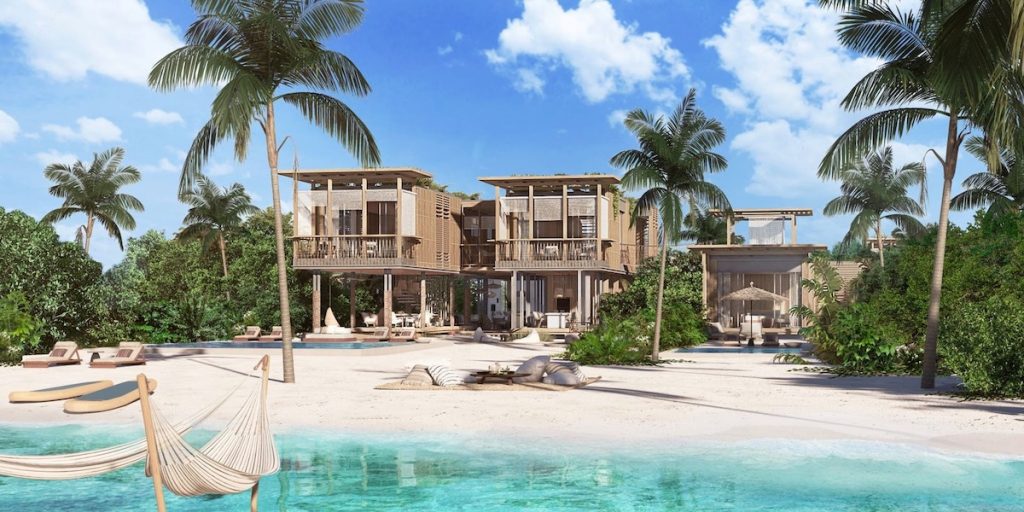 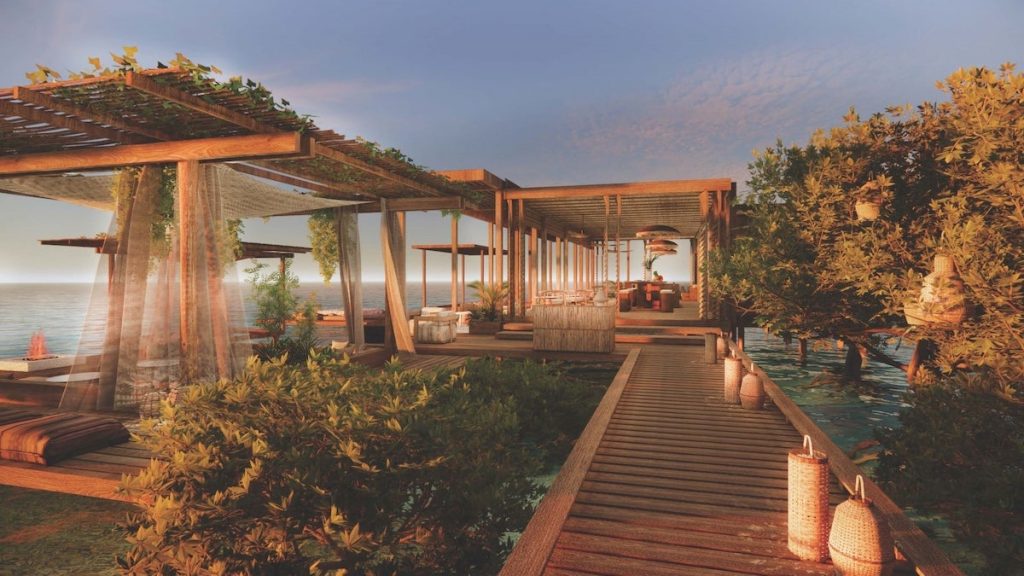 At Secret Beach (just north of the beach bars), you have a new upscale boutique resort nearing completion. Ix Chel Wellness Resort is well underway and nearing completion. It brings an exciting new vision and design to the west coast with a vibrant atmosphere. Both resorts will bring more restaurants and businesses to the West Coast, further propelling the desire to live and stay in the area.

You can see photo renderings of the project below; 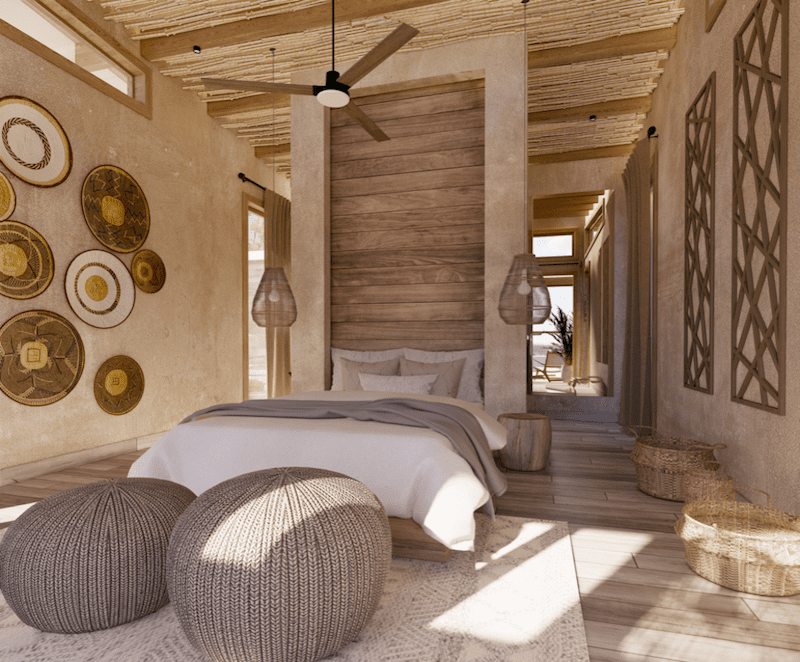 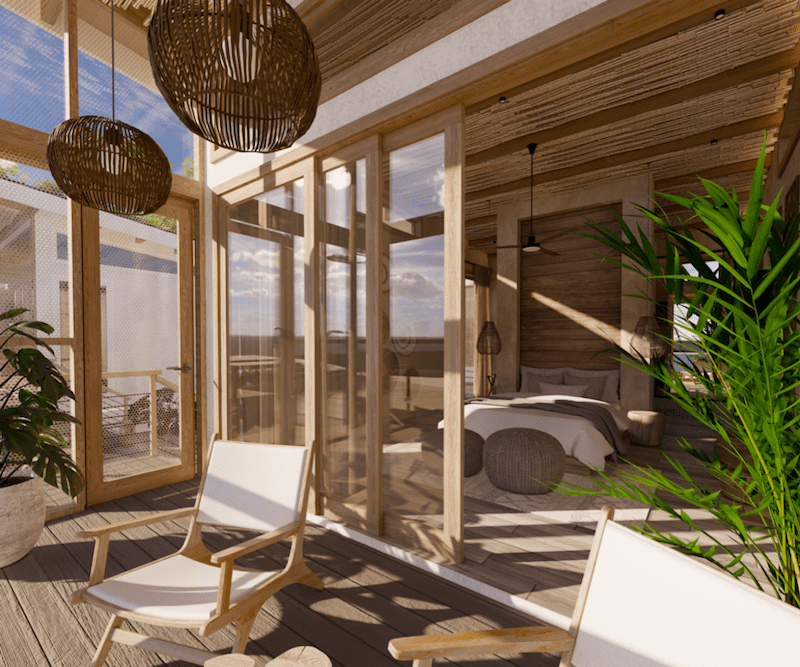 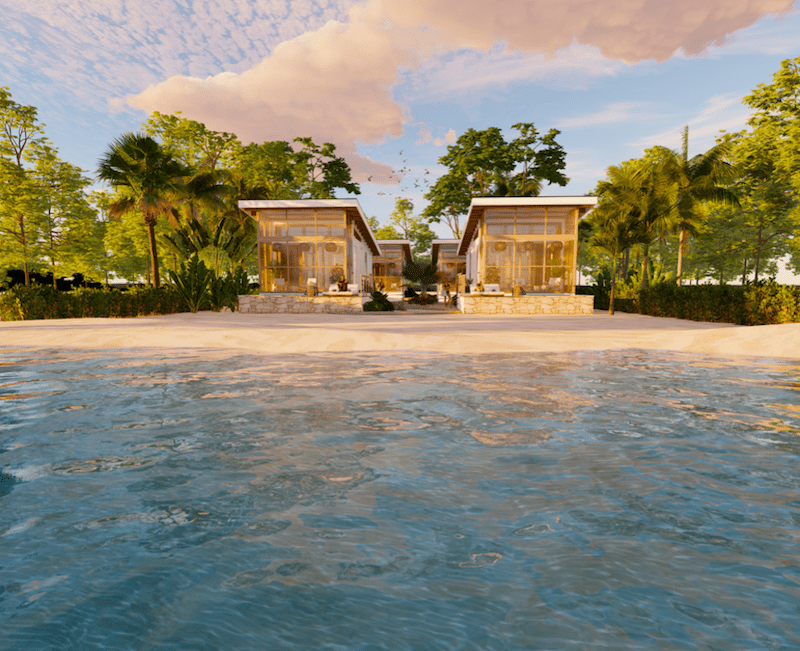 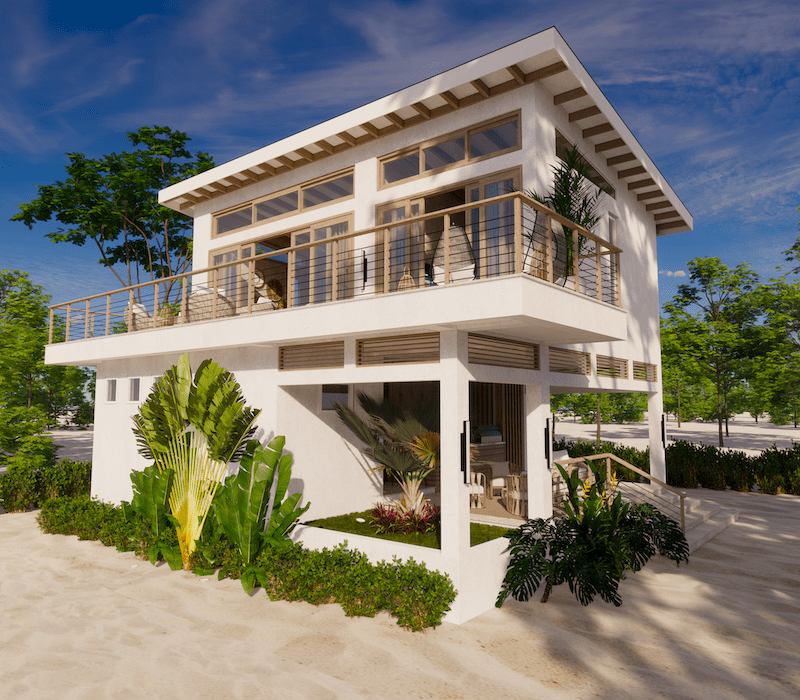 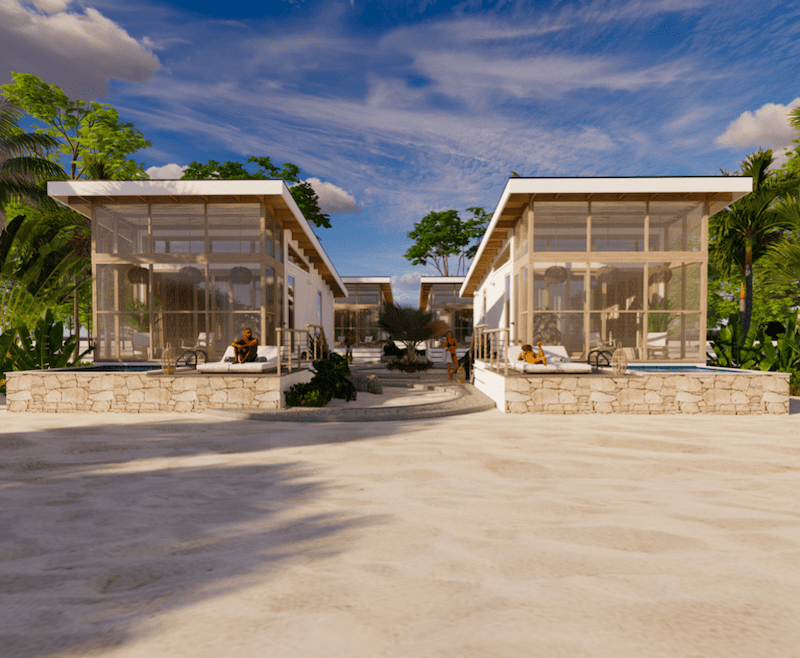 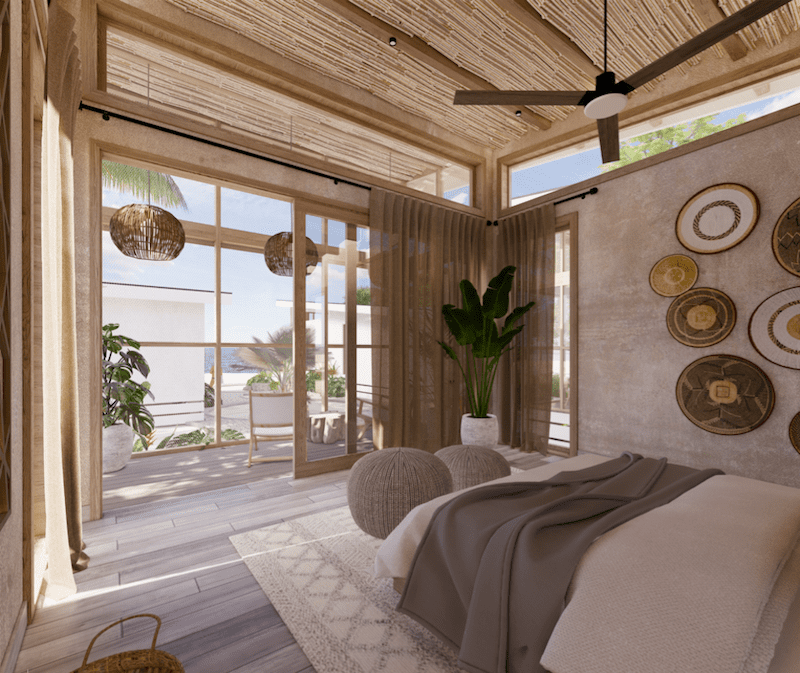 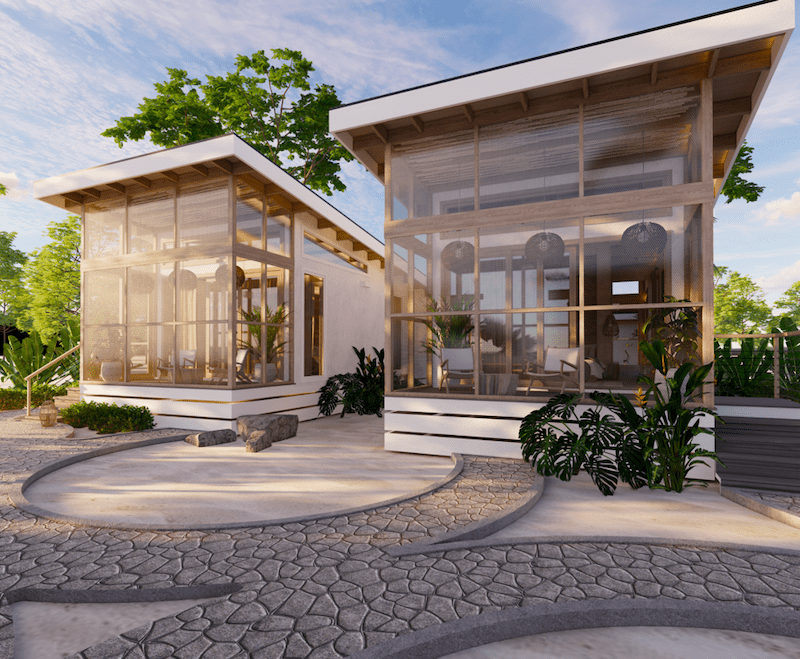 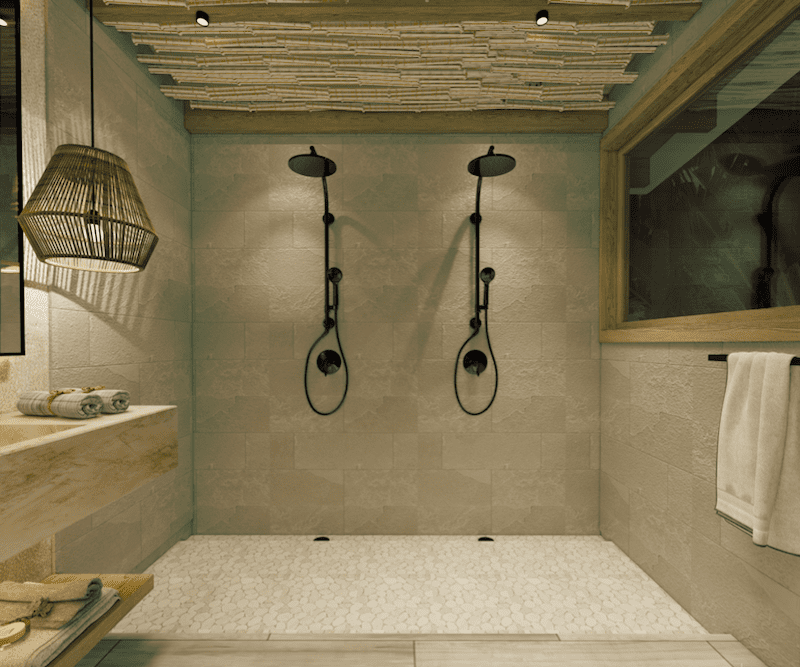 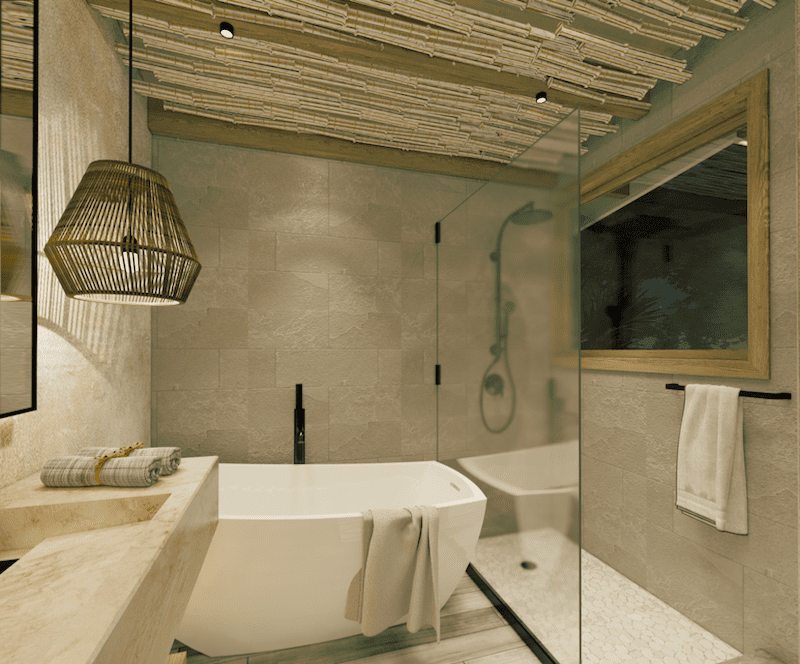 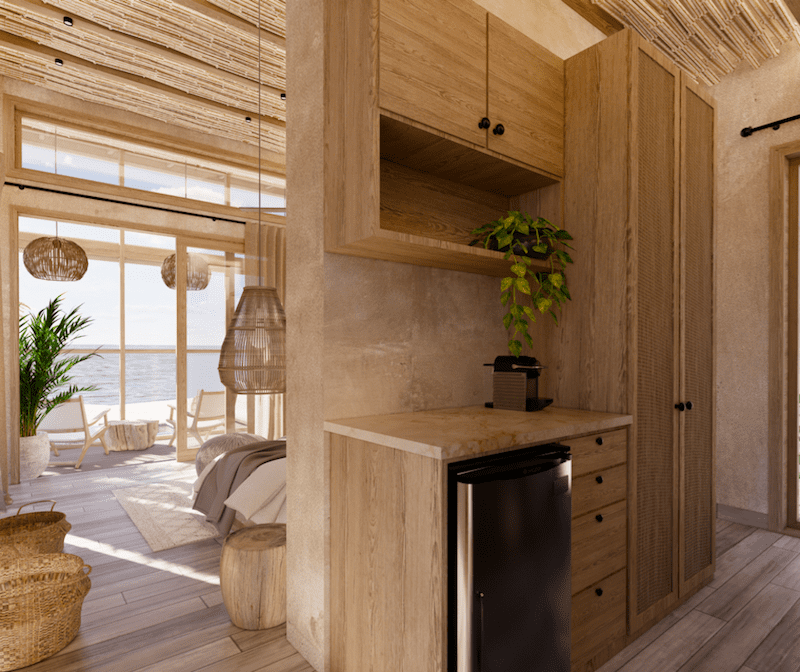 Off-beach, there are dozens of new homes, with more being added every month. There are also quite a few exciting new projects and communities underway off-beach (within a mile of the West Coast). Our team at RE/MAX Belize is excited to share those with you so you can see how much is happening in the area and the new opportunities available near Secret Beach.

Secret Beach changed dramatically over the last several years (2016 to 2023), and the next 6-years will see an even more substantial leap forward. By 2028, it will see even more development as these are only the first few dominos to fall. The West Coast is really at a tipping point, and there are still opportunities to buy off-beach Belize land for under $50,000 with financing available. Whether or not you build/develop the land, the Secret Beach properties are an amazing opportunity to be part of one of the region’s top emerging destinations!

The property near Secret Beach has a huge upside with little risk. You own an asset in an appreciating market hedged against inflation for less than a bank account annually. The only cost of ownership is the $75 to $90 per year property taxes (paid annually in April). You own the land outright, with a fee-simple title, financing is available, and the cost of ownership is almost nothing.

You are able to purchase a property and build. Or just secure the land and ride the organic momentum that will drive real estate value up.

Our team looks forward to chatting with you and making your Belize real estate dreams a reality!

Belize Secret Beach on Ambergris Caye is one of the top emerging destinations in Central America & The Caribbean for tourism and investment.

WHY HAS SECRET BEACH AND AMBERGRIS CAYE’S WEST COAST BECOME THE TOP GROWTH AREAS WITHIN BELIZE?

Thirty years ago, the main industry on Ambergris Caye was the same as it had always been. A sleepy fishing village built along the island’s eastern coast only a few hundred yards from the world’s second-largest barrier reef, the fishermen would rise with the sun and set out in their boats before the dawn had even reached the island’s barely populated western side.

In the time since then, the island of Ambergris Caye has changed dramatically, with its primary industry switching from fishing to tourism as more and more people discovered Belize and word got out. San Pedro Town (the island’s central hub entirely contained on the east coast and interior lagoon of the island) has grown to become a fully developed municipality, with a bustling downtown and booming tourist economy. Unlike those fishermen who lived along the eastern shore, the tourism market values sunsets over sunrises, and this tendency has shifted the path of progress toward the west coast of Ambergris Caye.

Originally a Sleepy Fishing Village, Ambergris Caye, and San Pedro Town had no plans to become the tourist hotspot it is today. In the beginning, there was no master plan for future development. San Pedro & Ambergris Caye grew organically as awareness increased.

With the Tourism Growth, available land in San Pedro Town is now fully developed, and the East Coast is parceled off. Where will the growth continue?

This led to the evolution of the west coast and Secret Beach. With land in San Pedro developed and the East coast becoming overly expensive, the next logical point of development was along the western coastline where road infrastructure was put in place in 2014.

The logical area for future development and investment had become the West Coast. With just a single road connecting the island’s eastern shore to its westernmost point, that western area (known as Secret Beach) has become the focus and epicenter of west coast development. Because of this, it is the area of Belize with some of the greatest investment opportunities and upside.

Only a few years ago, the beach really was a total secret; the only person you could count on seeing there was your own reflection in the water. Today we see that dozens of bars and restaurants have popped up alongside other new tourist-focused commercial development. Residential investment, development, and infrastructure are also booming in the area.

When assessing an area from an investment standpoint these are all key indicators that show us that Secret Beach is on the path of progress.

2010: Lots subdivided and available for sale. 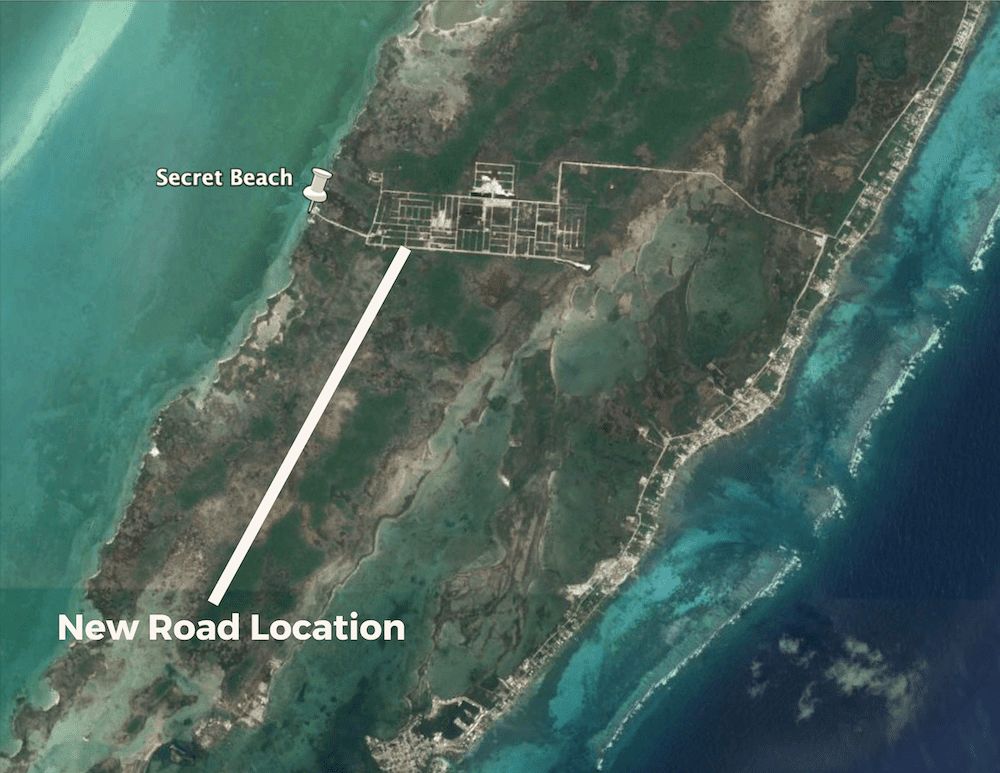 As the building boom continues along the West Coast of Ambergris Caye, infrastructure development to support that boom continues as well. Roads are being built to connect Secret Beach with the southern tip of the west coast, in addition to the creation of a route running right along the western shore. To put this into perspective, the biggest shift in lot values over the past decade occurred when the infrastructure was put in place to connect the West and East coast. A major new road project is underway again for the first time since 2014, and there’s no reason to believe the effect on property values will be any different.

So why is this big boom? It all started with the area’s natural beauty. Looking over the caye’s western coast there are some important distinctions from the east, the most notable difference being those shallow and glimmering turquoise waters that cross the twelve miles to the mainland. Inlets consisting of beautiful pearl-white sands live up to and often exceed the beauty people envision when they think of the Caribbean.

As if that beauty wasn’t reason enough, there’s also the lack of room for further eastern development which has caused this westward push. As the economy and popularity of Ambergris Caye continue to grow, more and more people have chosen to invest, making the land an increasingly scarce commodity on the island. There’s only so much to go around. While the success of the East has left little space available, the west is just beginning to take off, and investment opportunities still abound there. As the Great One, Wayne Gretsky said, “skate where the puck is going.”

Violet and coral-painted sunsets falling over pristine beaches of ivory sand; restaurants and bars serving food and drinks ranging from the simple to the complex and all crafted with the freshest island-grown produce; a finite amount of available land; and the fast-increasing popularity of the destination have all come together to create an earthly paradise where stress cannot survive. The investment opportunity is here, and it is clear. 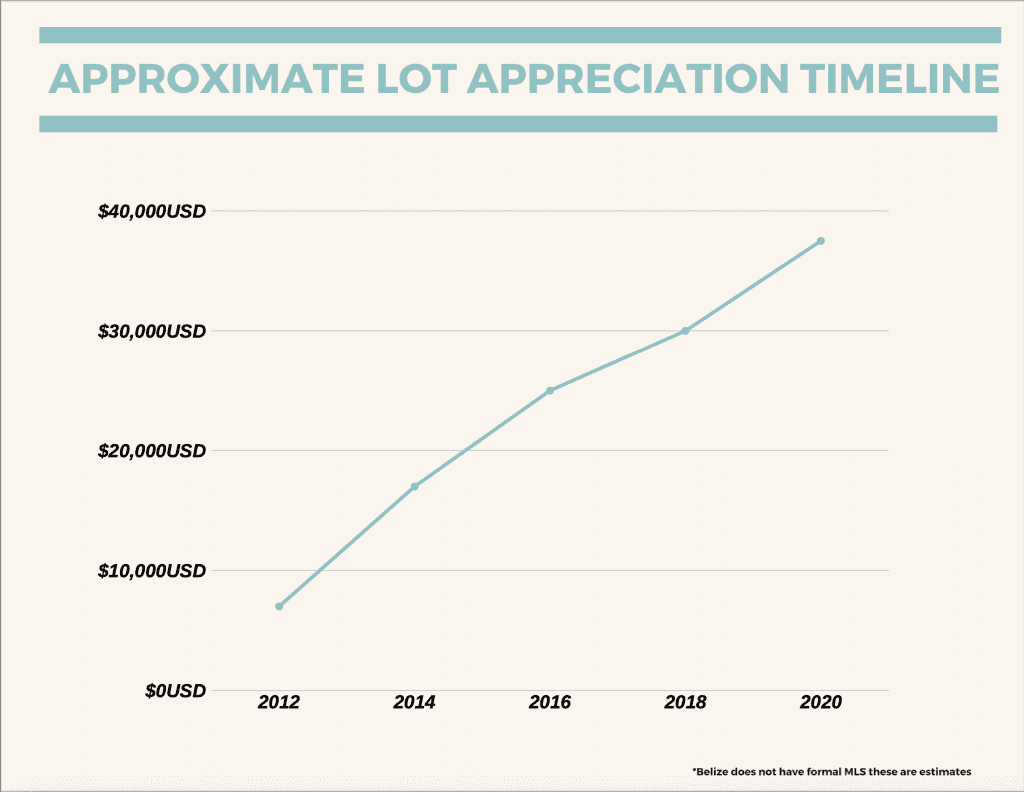 To learn more about the real estate opportunity at Belize Secret Beach contact us at RE/MAX Belize. We are here to help with your Belize Real Estate & Ambergris Caye Real Estate search.